ABSENCE: 3 perspectives on departure features three European artists working on issues related to migration, religion and popular culture in Senegal. While most exhibitions around migration tend to look at the trans-national political and geographical space, this exhibition focuses on intimacy and privacy. The perspectives are those of the migrants; what they leave behind them and what they recreate at destination to build a sense of attachment.

A subtext of the exhibition is the recurrent presence of the representation of Cheikh Ahmadou Bamba. Founder and Supreme Leader of the Mourid Brotherhood – a sufi oriented islamic current strongly established in Senegal.

The exhibition is curated by Koyo Kouoh, and is accompanied by a catalogue with texts by Salah M. Hassan and Nick Skiadopoulos. 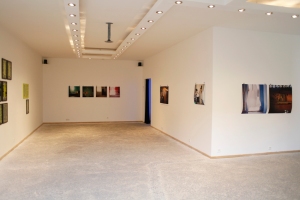 Developing a critical understanding of the wave of new migrations of African people across borders of environments and cultures, as well as modes of resistance, presents an urgent necessity. We must establish platforms for knowledge production to fill in the glaring gaps in understanding the cultural and political dynamics of a world in motion, and to focus on unearthing the root causes and consequences of new migrations in Africa and the West. Situating this phenomenon within historical, sociocultural, and artistic points of view will advance important frameworks for understanding the complexity of migratory flows of a disadvantaged population whose dreams and aspirations for a better life often get curtailed by powerful state practices.

Each of Quax’s photographs is a stand-alone canvas, in which the artist’s command of the medium transforms the scene into a compelling work of abstraction, while avoiding an over-aestheticizing act that would have compromised the depth of the conceptual aspects of the work. The empty rooms, which have been nicely kept for the most part by the families of these young men, speak volumes of the hopes, sadness, and fear felt by these families as they ponder the destinies of their loved ones beyond the treacherous seas.

Salah M. Hassan is an art critic, curator and Goldwin Smith Professor of African and African Diaspora Art History and Visual Culture at Cornell and Princeton University, USA. Together with Okwui Enwezor he founded NKA Journal.